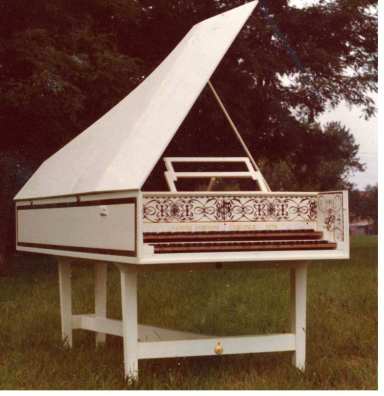 Are we all playing the harpsichord?

I’ll be honest – I have doubts. A lot of my friends have doubts. There seems to be something in the air lately. A worry, a question, about what the hell we all are doing.

Sidebar: A few months back I was rehearsing The Giant Squid at Swarthmore College and ran into my former thesis advisor. For those unaware, I completed a degree in chemistry and I really liked the stuff. And though I ended up pursuing theater, I loved hard science. It had rules but still allowed for experimentation. I liked understanding how the world works at the tiniest of levels. On my shelf I still have the thesis on chiral binding properties of copper-porphyrin aggregates and ct-DNA to remind myself the word laboratory didn’t always just refer to experimental theater but that I actually once worked in, you know, a laboratory.

So back to Squid, it was a super strange colliding of worlds to introduce the man who taught me the finer points of circular dichroism spectroscopy to the actor with whom I’d just discussed the best angle to allow a giant tentacle to wrap around her 14 months pregnant belly pad.

He asked why I had returned to the college. I explained I was putting on a show for the student body.

“Oh yes! And is that what you are doing these days?”

And I told him that, yes, in fact I had a small company in Philadelphia that made original works of theater.

“Fantastic! Why, it’s everything you always wanted Adrienne. Congratulations.”

When I tell this story in person I deliver that last sentence as a punch line. I exaggerate the “Fantastic!” and pour on feigned gushy-ness for “everything you always wanted.” As if it’s funny, ridiculous even, to imagine that everything I always wanted was to run a theater company. And when I realized I was doing that, I also realized that there are lots of times when I talk about my work in this kind of diminishing way. That even though I spend so many of my waking hours advocating to others about what I do, I still find myself angry at my art form a lot of the time. And it’s a little scary, if I’m really honest about it, that as a person who does exactly that for a living, I ought be the last person who would want to make running a theater company sound like a laughable pursuit.

As young creators, I think we spend a lot of time taking in information without really questioning: best practices of creating, tips about living a life filled with art-making, and information about systems that support the work we create. No one would deny that a life in the arts can at times be incredibly punishing. And while I deeply believe in the intrinsic importance of artistic experience as a concept, if I’m to keep at this particular mode of it for another 30 years, I need to know it’s worth doing this art, in this way, at this time. Because those same skills that I’ve honed to question my work to make it my best also keep me up at night asking: “Why do I make theater?” “Why do it this way?” “Why is it useful?” “Is the result worth the effort?” and “Do I even like it?”

I worry sometimes that I’m playing the harpsichord. There’s nothing bad or wrong about that instrument. It’s just not terribly useful or relevant to a vast majority of people in the world. So in the last few months I’ve been trying to pick that instinct apart. Figure out whether it’s conventions that I think the form has gotten stuck in, its place in a changing and increasingly technological society, the non-profit system that surrounds it, the harsh under-capitalization it suffers from, all of these, none of these… And in trying to figure out how to reconcile myself, I thought it might be interesting to share these thoughts and elicit responses from other smart people thinking about the same kinds of things. So for the next month, I’m going to write at least 500 words every day for 30 days to see if I can define what I really think about theater and how I make it. And after 15,000 words of my own (and hopefully a bunch from other people in response) it might be possible to get to the parts of live performance that are amazing and transformative so that I can cut out the other crap and really concentrate on making what matters.

Either that or make a quick pivot back to research chemistry so I can stop playing the harpsichord before it’s too late. (#stopplayingtheharpsichord)

See you on the other side