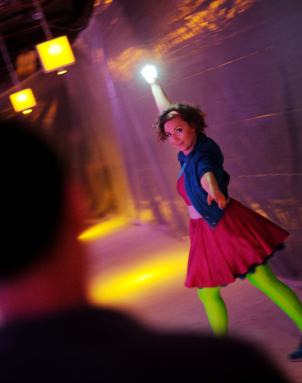 Helmed by artistic director Adrienne Mackey, Swim Pony was founded in December of 2009 to give a name to the body of genre-defying work she creates with an ensemble of multidisciplinary artists in Philadelphia. The company began with the critically-acclaimed SURVIVE!, a 22,000 square foot choose-your-own adventure installation piece exploring how humanity understands the universe and man’s place within it. Next up, they premiered Lady M, a feminist take on Macbeth blending Shakespearean language with Mackey’s original approach to voice performed by a 12-women ensemble of witches. It premiered at the 2011 Fringe Festival and performed to over a thousand people in eight performances.

From there, Swim Pony continued weaving the arts into the community by creating its original works in unusual spaces with the aid of a Knight Arts Challenge grant. The Giant Squid (a co-production with the Berserker Residents) performed to over 600 people in college science lecture halls across the Philadelphia area in 2012, while The Ballad of Joe Hill – originally created in 2006 and presented again in 2013 by Fringe Arts – boasted a sold-out run at Eastern State Penitentiary. Joe Hill was called one of the then-17-year-old Fringe’s all-time select “masterpieces” by Philadelphia Weekly’s J. Cooper Robb and was featured on WHYY’s Radio Times with Marty Moss-Coane. Meanwhile, a residency at Drexel University resulted in Welcome to Campus, which brought audiences on a very different kind of campus tour as they were led to twelve performance spaces along a two-mile route exploring the real stories of the college experience.

A second Knight Arts Challenge grant in 2014 launched “Cross Pollination,” an interdisciplinary residency program that in its first two years hosted 15 trios of artists in fascinating and innovative explorations of where diversity in form and content can intersect. For example, during the final residency, the artists took a 103-mile pilgrimage around the border of Philadelphia to explore interests in life at the margins and embodied understanding. The walk was followed  with two sold out presentations at the Philadelphia History Museum, an article on the front page of the Inquirer, and ongoing interest from other organizations. 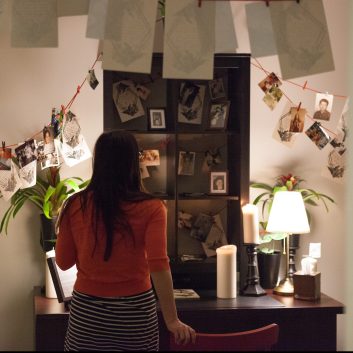 Since then, Swim Pony has dove deep into explorations of hybridizing theater with gaming to create new forms of live experience that combine the best of what both have to offer. They hosted a summer research workshop “Play/Play” which engaged other artists in these questions, and partnered with Drexel’s Entrepreneurial Game Studio for War of the Worlds: Philadelphia, a large-scale experiment into the possibilities of using mobile-gaming and live performance to build real-world story. This interest also inspired 2017’s premiere of The End, a month-long text-message based game leading participants on individualized explorations of their own mortality.  Testimonials from participants were effusive, with one person writing, “The End should be required for all human beings.”

Adrienne also helms Awesome Lady Squad, an advocacy group working towards gender parity in the arts, and a blog that opens up the ways art intertwines with life and the inspirations and origins of the company’s creative process. She is a member of the Network of Ensemble Theaters and the American Society of Theatre Research, where she shares the company’s research on game/theater crossovers.

When I was founding the company I had an incredibly hard time trying to come up with a name. I wanted something inviting and playful that also was a little mysterious and made people want to know more. After a series of TERRIBLE ideas I was discussing options with friends at a bar one night and the waitress asked what we were talking about. I told her and asked what she’d name my theater company. She pointed to the chalkboard where there was an IPA on tap called Pony Swim and said, “Well that’s kinda fun.” So I reversed the order and Swim Pony was born.