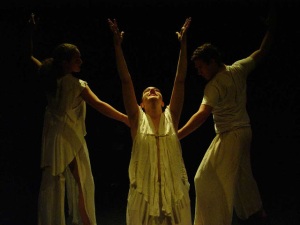 Dear Theater Gods. You definitely have no intention of smacking me down, right?

I miss being hungry for the work in an uncomplicated way: unadulterated and sparked from genuine interest. I crave to be un-tinged by the producer’s brain. I just want to want to make and make and make like I used to.

I fell into directing, mostly because I had looked at other people and thought “I can do that.” I didn’t have much ego about it, just said “Why not?” and did it. And then one day I realized that THIS was who I was and what I did, as if it had just been waiting for me to get there. That this was the thing I’d always been intended to do.

I had terrible taste. I picked plays that were overdone and  underwhelming. Things in anthology books that everyone buys at Barnes and Noble. Broadway hits from 20 years ago long since past their expatriation date. Chrisopher Durang. Steel Magnolias. Agnes of God. Late, tragic, Tennessee Williams. Characters’ whose tears and laugher were just under the surface, massively emotional and dealing with those emotions ALL THE TIME.  Uncomplicated nutbags that in retrospect seem like self-indulgent excuses for actors to cry. Stuff I would never do now. But at the time, at the time it was SO exciting. So electrifying. So full. So much.

During that time I created my first piece from scratch. It is funny to write this but the truth is that I have never had a project that has come close to the totally raw, completely maniacal drive with which I attacked that piece. I read anything I could think of. I devoured music, images and text compiling a massive overarching collage of meaning. Or rather, I read into every book I encountered my imaginings of this story. It seemed like every piece of music, every line of text, every image around me was destined and intended to fit in some way into this giant thing that was welling up within me.

I dreamt this work. It spilled into every spare moment. Filling the lines between notes in class. Creeping into my thoughts on the treadmill. Playing itself across the back of my brain as I walked across the campus. I was in love with this story. I fell in love with making this play. It was totally consuming and it seemed that I didn’t need anything else in life but to do more of this work.

The play was a meditation on the myth of Ceyx and Alcyone. You can look it up for more details but in brief: Ceyx begs his wife to leave the island out of a fear of never accomplishing anything. Alcyone is inconsolable knowing that the god Poseidon has a vengeance against her for rejecting him. He sneaks off in the night and of course, dies, leaving her to wait, pathetically, on the shoreline for years, singing to her husband starving and wasting. The gods, tired of her lamentations, send his body back to shore and as she runs to it, they both turn into birds, halcyons, to spend the rest of eternity together.

It wasn’t a clean piece. It wasn’t really much of a story. It was a series of meditations on an esoteric myth: a scene where two lovers dare each other to deeper and deeper levels of proclamations of “If you really loved me you’d –” ending with them drowning each other in a bucket of water: 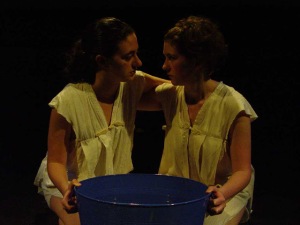 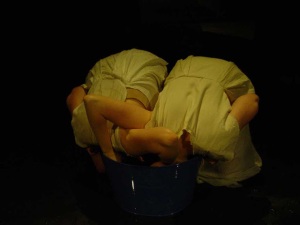 There was also a scene in which Ceyx’s boat is made toy size and Alcyone watches from a far as a life sized Poseidon drowns it: 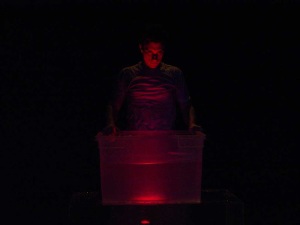 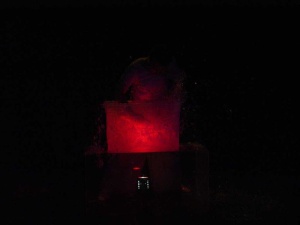 A pair of sails unfurled into a giant pair of wings. A man turned a woman turn into a bird and regretted it. A strangely large amount of mopping.

To me seemed like the earth had moved. It felt like I shared that with my performers. That we’d all given birth. My brain was on fire with ideas that weren’t mine, just channeled through me. I wanted to watch the thing over and over again. I played it in my head again and again. From the outside, I can’t really say, I wasn’t paying much attention. A Polish theater reviewer happened to be visiting the department giving me my first (and currently only) international review:

“Music surrounds us from all sides, perhaps a little too aggressive and accidentally chosen… But what acting – quite a few Polish actors would envy these twenty year olds for their abilities. The boy sitting next to me begins to cry buckets halfway through the second performance. I am not surprised: the unhappy Alcyone, shaken by spasms with every despairing moment of Ceyx’s sinking ship did not leave me unmoved either.”

My mentor saw it and said “You know, when you told me what you wanted to do, I thought, this is a play about break up. And usually when a student wants to make a break up play it’s almost always terrible. But this was actually very good.”

My mom cried after she saw it because she said she was sure that her getting divorced had ruined my ability to love unconditionally.

The funny thing was that I had no idea that any of these things were in the play that people saw. I was floored that anyone thought it was about the end of my first real relationship. I just thought I was digging around a Greek myth. I had no idea what audience watched. Or what the piece ultimately said. I didn’t have to. I never wrote a grant or pitched it to a presenter. I just made stuff. All that time, as I dreamed and thought and read and reacted I never had to explain.

I just tried to satiate the hunger.

The very next year I made another piece about another myth with more money and resources, more advice, and ostensibly more experience. Same cast. Bigger theater. Big disappointment.  Parts of it, many parts of it, worked. It was objectively a much “better” play. But it didn’t give me the raw, unadulterated heart of that first piece. I don’t know if an objective audience would agree with me. Maybe it doesn’t matter. Maybe even if they liked the second one better for its polish and care and craft, I’d still rather make the first one.

I don’t know what to do with that. In work, in life, in all the choices that matter. Do you run to the thing that feels sticky and rough around the edges, that because of its coarseness continues to catch at your clothing, pulling at you and requiring attention; or do you move ahead carefully, healthfully, allowing experience to change you, grow you, maybe temper or dare I say settle you?

I’ve spent a lot of years learning to feed myself, but I worry that I’ve forgotten how to be hungry.

PS – Thanks to Ben Camp, Kate Hurster, Felicia Leicht and Sarah Yardney for being in those photos. And Sam Dingman for being there in spirit.