A lesson from a teacher who has already taught me a lot: Good intentions don’t matter much if they aren’t borne out in action.

First off, I owe you a public apology. You’re absolutely right. It’s inexcusable that I have checks that have been sitting on my desk since October. We delayed handing them off and  I let it slip under the radar once we got out of show mode. I take full responsibility for that and I have no excuse. It’s behavior that is unprofessional and just plain rude. Despite the impossibility of conveying real emotion online, I want to say to you that I’m really, genuinely, sorry. And I’m doing it in a public place because too often, people do crappy things and no one but the person who the crappy thing was done to ever hears about it.

So I agree that you have every right and reason to doubt the seriousness of my word. I can’t take back that neglect (much as I wish I could). The only thing I can do is say that I feel real remorse at having disrespected someone that has always treated me with care and kindness. I’m clearly still learning how to stay on top of business practices in a responsible way. I should know better and will make sure to DO better in the future.

A second lesson from a teacher who has already taught me a lot: When you mess up, the least you can do is admit what you did wrong, do the best you can to fix it and write down your mistake and display it somewhere prominent so that you damn well remember next time not do the same thing again.

A newly hung sign in my work space, tapped to the wall directly in front of my desk: 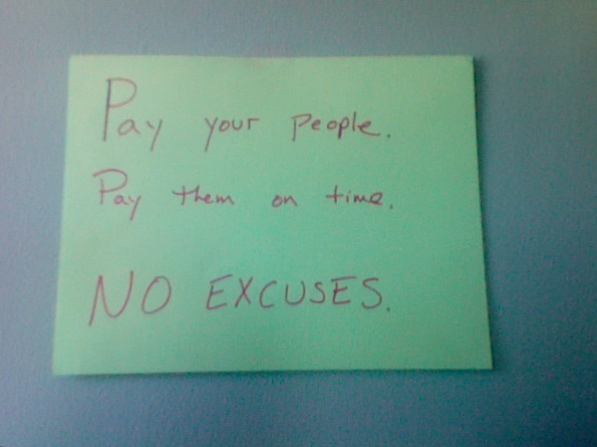 Suffice to say, you’ll be getting some mail from Swim Pony this week.

And just to quickly touch on the other point you made: I also agree that $1,500 is not a living wage for designers, even if it’s the standard. Designers are, in my experience, some of the most overworked people in the industry (second maybe to production managers). In the interest of disclosure, I will say $1,500 was the level I started out at for the designers on my last show. I picked that number for all the usual reasons (it’s a small operation, don’t have access to a lot of foundation funds without non-profit status, it’s the standard of companies with a lot more capital, etc, etc) but when a designer came to me, I took an honest look at the workload and agreed that we could to do better. We pulled another $1,000 from other places in the budget and the show didn’t suffer a bit.

Of course, $2,500 also isn’t enough to live on either, but it’s a step in the right direction. And more importantly, I hope it shows that when I’m the running an operation, people can tell me when they think something isn’t fair or right. That I’ll try and support them the best I can. That I will apologize, do what I can to make amends, and work to change when I don’t. That I want to know when I’ve hurt someone’s feelings or done something wrong as much as that’s hard to hear. That I’ll make it a core principle of my company to give people what they deserve as much as is possible.

I suppose my hope is that if I keep taking steps in that direction, and encourage those around me to do the same, in 3 or 5 or 10 years I will be offering something that is liveable for myself and the people I work with. But, as is clear today, I’ll have to prove that with actions or my words by themselves won’t mean all that much.  It’s a lesson I’m going to work hard at following in the future.