In 2011 PIFA spent $10 million dollars on their first festival.

Think about the impact of $10 million dollars on an arts community. What can (or should) that look like? If that number just seems beyond imagining, take these few stats in to help give it some perspective:

$10,000,000 is 25% more than all of the Pew Charitable Trusts annual budget for a year. It’s roughly all the assets of The Arden. It’s about 100 years of Swim Pony work if I continued at last year’s pace.

And as this article says that’s also

Chances are you aren’t a millionaire. Which means that unlike the folks over at the Kimmel, you don’t get to decide where that money goes.

You can argue how PIFA is spending its money (and from the looks of Facebook a whole bunch of people are) but imagine instead what it might be like you didn’t have to. For a moment, imagine that you had to give away that 10 million dollars tomorrow to theater artists or companies. What kind of work would you want to support and why? Would be to companies with an established track records or would it be to scrappy folks making stuff that a little less predictable? Who are the people who you know are awesome that just can’t seem to get the dough?

The question is at its core: where do you think the money belongs and what kind of work do you want to see in the future?

The Wall Street Journal did just this thought experiment in NYC with some interesting results.

I think that chances are the money in the real world is not allocated the way that artists might decide if they had the control. And while on the one hand, we could look at the difference between where the money does go and where we think it should be going and despair, I think that there’s another take away here. Artists are often out front of what’s coming down the artistic pipeline. How could they not be? They are witnessing the development of the future leaders and successes before they get there. And I think because of that, we should concentrate on doing a better job telling the outside world not only about our own awesome work, but about the awesome works of the fellow artists that we admire and respect. The folks that we know you need to know.

There’s a trend among smaller companies these days to have a section of their website that lists of other people that they think are great with links to their info.

I think this small gesture might be the first signs of something bigger.

At least, that’s what I hope. Because it’s the future that I see people like myself surviving in. I dream of a future with more opportunities for cross-pollination between individual artists or collectives and institutional organizations. I wish for a Philadelphia in which the possibility for getting one’s work to an audience doesn’t depend so heavily on one’s institutional building capacity. And In my mind that means more money directly to artists AND presenters/curators that are not their own primary generative source.

In addition to this, I think there are organizations in town that do a huge service to the landscape with little to no monetary or accolade recognition. They diversify our audiences, educate us as artists or create unimagined resources that help us immeasurably more than their budgets would belie.

So with that context, here’s what I would do if I had PIFA’s cool 10 mil to divvy up to Philly theater and affect change the way I want to. I’ve listed the company or person, divided roughly into categories of how they’d serve the city’s future arts interests and why I want them to have that moolah.

These are the folks that have the possibility to take on a bulk of administration for artists so that they can really focus on the art. HERE Arts, PS 122, The Kitchen, La MaMa. NYC is lousy with places you can apply to without a 501 (c) 3 to help get your work out there. We need more places like this.

I love these four companies. They are doing the new exciting work and they are each doing it in a totally different way. If you don’t know these people, go look ‘em up right now. Bigger bucks to the Mechs in part because their stuff is super tough to explain and raise money for. Little less to the Beards because they’ve done pretty well on the institutional support and grant front.

Talk about people who do an awful lot with very little. Chances are you don’t know Mantua, which is too bad because it is one of the most exuberant, genuinely empowering and artistically excellent youth theater programs in Philly. You probably know Play Penn. And as much as I personally tend not to spend as much time in the traditional script world, I think it’s great that they’re making this town a place that people think of when it comes to developing them. And lastly, chances are you do know Clark Park. Now take a second to think about what their presence means to this city. It is hard to deny when you look at a photo like this: 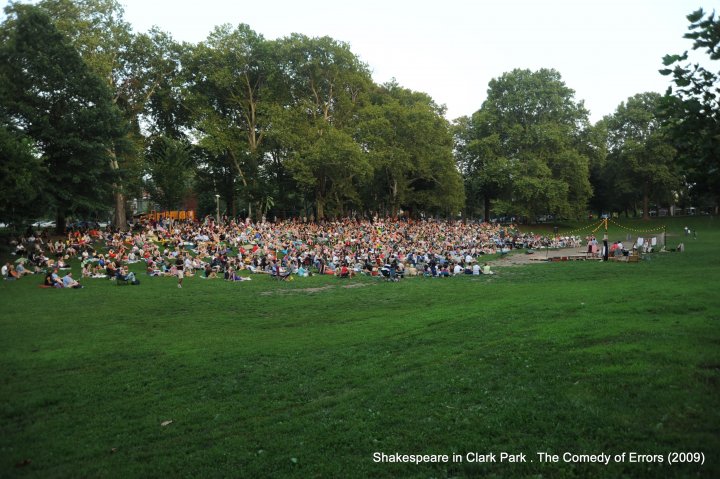 Remember that what they do is 100% free. I defy you to argue how much that matters for theater’s future in this city.

–       Culture Works – $600,000 – earmarked for offering free membership to mid to small size organizations for a year or more

If I could endow AU forever, I would. I think there’s probably no better program for artists out there. I am sure that there’s nothing making a deeper more sustainable impact on creators in this city. Culture Works I know less from the inside, but they are asking some big questions and thinking hard about what arts will look like in the future. White Pines is in an even younger state of development, but anyone that is trying to transform an empty Gilded-Age mansion into an artist haven and offers its incredible beauty to selected resident companies free of charge is bueno in my book.

Think about the possibilities that open up when a year or more of your living expenses are subsidized. There are more women than men out there and they are fighting for fewer total jobs. No offense to the talented guys on the theater scene, but can we get a little cash to these ladies, already? By the way, Pew whose fellowship program actually does do this for real people has awarded 16 men and only 4 women Fellowships in theater based on the listings back to 1993 on their website (with 47 men to 26 women granted across all disciplines from 2007 to this year). So you know, the ladies actually need it.

And finally shout outs to Headlong, Amanda Damron, Scott McPheeters, Green Chair, Johnny Showcase, Les Rivera (aka el Malito), Megan Mazarick, Mike Kiley, and Nicole Canuso who I love but didn’t include for the purposes of this because they aren’t officially theater.

I think about how different that list is from the amounts of money that is actually dispersed. I think about the real impact such a gift would make. And I think it’s important for us to do imagine and articulate a vision of the world where the money does go where we’d want it to. So that when we’re asked to be a part of that conversation, we’ve thought as long and hard as the people that generally get to decide.

I’d be interested to hear, where would you put all that money?