I’m not usually a re-poster of videos and I’m usually especially loathe to re-post TED  videos. Too often it’s just too easy to pass along another person’s great ideas in place of the far more difficult task of sitting down and coming up with one’s own. Too often it feels as if such videos are a way of saying, “Here in place of original and provoking thoughts I had to wrestle and wrangle myself is a shorthand to someone else’s.”

But today I make an exception.

I want you to watch this. All the way through. It’s 20 minutes and it encapsulates so many of the feelings I’ve tried to express in this space that I felt like I need to pass it along.

Mr Pallotta eloquently expresses how our current conception of what a non-profit is and how the current system actually hurts the causes they claim to be protecting. Here are just a few responses to the five points he lays out.

It’s funny. I still have an internal sensor that goes off when I think about that statement. I believe artists are important. I believe their work matters. And when I think about an Artistic Director making half a million dollars a year, but first instinct is to think of them as stealing. This “ethical” stand requires those of us who imagine going into such a field to make a trade off between doing good for the world in general or doing good for ourselves in particular. Wouldn’t it be better if we could incentivize the future’s most brilliant thinkers away from working for oil companies and towards making the greatest art possible?

This is not a theoretical conversation for me. I did not think I would go into the arts. And if I hadn’t, I would be making a lot more money than I do now. Not a lot like 20 or 30% more. A lot like 10, 20 maybe even 50 times more than I do now. My chemistry degree is one I could have parlayed into a career at places like Dow or Dupont. I could have gone to a grad school that someone would have paid for. My very first year out of college I could have made triple what I currently earn. That is a long term sacrifice. And I think that as Pallotta says in the video the “stark and mutually exclusive choice” can at times seem like a crazy thing to have done.

There’s a graph he shows in the talk that looks like this: 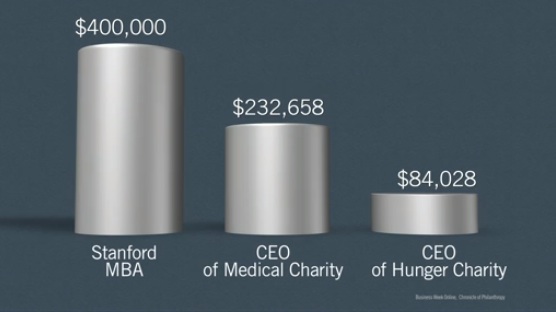 Is it any wonder that the best and brightest are NOT staying in the non-profit arts world?

Terry Nolan, for reference, the AD of one of the largest theaters in town was making just under $101,000 for the year 2011. Amy Murphy, the Arden’s managing director, was at just over $88,000. Do those numbers of first blush make you angry? They might, because we’ve been taught that our work is intrinsically rewarding and therefore not worthy of payment. It is up to us to think about how we can recalibrate this expectation. I don’t know either of these two terribly well. But guess that these figures are nothing close to what they could be making for similar intelligence and hours applied to other fields. And this is the very top end of what’s currently being compensated in Philly.

I found both of these numbers, by the way, from a 5 minute Google search. Because if you’re a high paid member of a non-profit, you are legally required to publish to the world, exactly what your salary is.

This section is especially interesting to me in thinking about my work as a performance medium. Pallotta cites 2% of GDP as the figure at which charitable giving is stuck. I thought about at different 2% – the percentage of people in the Philadelphia area that go to see theater. Does your theater company convince 2% of the population to come see your work? I doubt it. Could it? Would changing the way with think about investing in marketing help? Once we reached those people once could we fundamentally increase the participation in the art form as a whole?

“So Disney can make a 200 million dollar movie that flops and no one calls the attorney general.”

In the arts in particular this topic hits incredibly close to home. Pallotta’s talk is mostly in relation to risk based on revenue generating ideas and that does ring true in the arts, but the micro-managing fatigue I hear in others and feel in myself is particularly pointed in the arts section. Creating new work is inherently a risky business and I’ve written before about the ways in which current funding structures don’t reward innovative or unanticipat-able process that result in real revolution in art making but instead encourage all aspects of a project to be figured out ahead of time.

“When you prohibit failure, you kill innovation.”

The larger culture praises the Googles and Apples and Facebooks for trying 100 crazy of ideas in the hopes that one of them changes everything about the way we think about the internet or phones or email. Artists are by their very nature programmed to be doing this kind of out of the box thinking. By definition they are masters at bringing into being things that neither  they or anyone else has yet been able to conceive. So why do the systems for getting them the resources to do that so often require overly controlling and specific explanations of process and outcome before they’ve even begun to create? It’s a recipe for non-visionary work. That artists manage to succeed despite this is a testament to their creativity and power, not a message that the system is a good one.

“Amazon went for 6 years without returning any profit to investors.”

Artists know exactly how long it takes to hone and build craft. But were we to ask for the kind of time and investment of funds towards a project on the order of 6 years we’d be laughed at.

This is a major difference in the way for profit art mediums – record labels, movie studios, Broadway theaters – work compared to the non-profit. I’m not saying that we should all become corporations but it might be worth thinking about the ways in which entrepreneurship and traditional business structures can help revitalize the way we think about raising money in the arts.

Lastly, he goes into the point that the question of funders wanting to stick to project based work and keeping overhead low. This again, is an area that most artists I know are constantly up against. So much work needs to happen before a project is conceived and in the in between spaces to continue to keep the company going that we end up with overworked, under-resourced administrators and creators who when they finally get into the room are so distracted and tired they aren’t able to make the work they’ve been spending all the time preparing for. What if ALL funding was “general operating”? What if artists had TOTAL control over how they funded their art making process? I bet after a few years of adjusting to the shock they – the folks who are making work every day and see how and where that implementation would be most useful – would be more productive than anyone would imagine.

Are you interested in this? I am. And I want to open up this discussion with other artists. Maybe if we can all get on the same page, we can codify the way we’d like things to be and share that vision with the people that could help make that happen.

PS – Thanks to Brendon Gawel for passing this along to me in the first place.