And though we haven’t had much time together in this space, I feel like I’ve gotten closer to the Philly arts community in the past few days than I have in the past year. Monday marked the very first of the Cross Pollination “coffee dates” – meetings in which the folks selected and grouped together after the initial application round meet up and see what kinds of chemistry might result. I’ll be doing A LOT of these in the next couple weeks. If they keep going like they have been, the CP team will be in big trouble because we’ve found some really kick ass creators out there in the Philly landscape and choosing half of them to move on is going to be a daunting task. 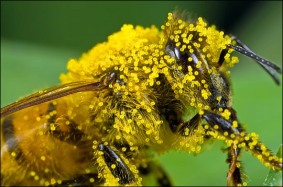 Tomorrow I’ll begin profiling the groups that I’ve met with. I’ll be lucky enough to be an equal participant with all the groups that are brought together as part of this – the third leg of all the trios that move on. And because I don’t want to be the only one to get to see the wealth of awesomeness, one of my big goals for the Cross Pollination project is to share the creative research that happens at every step of the journey. So expect a lot of thoughts about how other genres can teach us about our own work this summer and in the months beyond.

I thought that I’d start at the beginning, with myself, the only common thread through all the projects.

We received 90+ submissions for this project. Only 30 artists/ensembles, 15 pairs, were selected to meet in person with me to see what kind of a trio we might make. Each one of those folks wrote something in their application that sparked myself and the reader panel to know more. And since they did all that work, before we met I too created an “application” that I sent to them. It explained my work and impulses to pollinate using the same questions I’d asked them.

Artistic area(s) of practice/expertise: Theater mostly, with a little writing and voice in the mix as well

• A bit of writing

Using 400 – 800 words on this form or another attached sheet write about why you’re interested in Cross Pollination: What makes you want to participate in this project? Do you need to shake up the way you make stuff? What makes you want to work with artists from other disciplines? Is your current process open to change?

I wrote the grant that is funding Cross Pollination on a whim.

I’d received funds from the Knight Foundation previously for another project called “Outside the (Black) Box” in which I staged theatrical works in unusual spaces including a show at Eastern State Penitentiary and another that toured to science lecture halls all over the city. And because this foundation had never done it before, I figured there was no way they fund me a second time.

So I used it as an opportunity to imagine a kind of ideal artistic experience: one that allowed me to meet a huge number of new and diverse creators, one where I got to spend substantive time, was well paid and had access to any resources I might need, and most importantly had the chance to do some research and development without the pressure of any finished product. As a former lab chemist, I approach my creative “experimentation” with a scientist’s sensibility: I ask questions I do not yet know the answer to and then carry out research that delves into the inner workings of my subject of study. And it’s funny that it was while working in a lab that I discovered directing live performance was going to the thing I would commit my life to doing.

I say live performance because when most people think of the word “play” they tend to imagine red curtains and “please unwrap your candy” speeches and sad family members sitting on beige couches talking about their relationship problems. That or Elizabethan doublets and “To be or not to be.” And while I don’t mean to say there isn’t value in those kinds of experiences, the kinds of work I’ve been making for the past decade tends to look and operate differently. I usually ask a bit more of my audiences than sitting back for an hour or two and watching. I want them to sing, I want them to move, and sometimes even choose the way they navigate the experience they take part in.

And yet, while I love creating and directing these kinds of projects, I’ve also always been a bit of an artistic omnivore. I studied classical opera as well as some pretty “out there” experimental approaches to voice. I’ve acted professionally and currently sing back up vocals in a funk band. (I’m the one in the middle with the big hair). In the last few years started writing the words my actors speak and also composed nearly 50,000 words on the state of the arts in Philadelphia and beyond. My directing works have always been an outlet for my interest in other topics – quantum physics, American labor history, science fiction, racial tensions between communities in Philadelphia – and the form these works take are often inspired by other mediums I encounter in researching them.

So in a way, this project is my chance to formalize that process. It’s my attempt to find other people who have developed skills in one area and want to see what they can learn by smashing them up against another’s. It’s a way to remind ourselves that there’s always more to learn, always new directions in which to grow.

• A bit of everything else

Share a bit about your work. This can links to audio recordings, video clips, a digital portfolio or website, press coverage and/or writing samples – basically, whatever you think best represents what you make. Feel free to also include information on any upcoming show/reading/performance!

Last fall I created a piece at Eastern State Penitentiary for the FringeArts festival called The Ballad of Joe Hill. I love working in spaces that aren’t theaters. Something about discovering the story of the place and how it’s architecture helps convey the emotion we’re after is really exciting to me. Below are a couple of my favorite photos from the show (all credited to the amazing Kyle Cassidy): 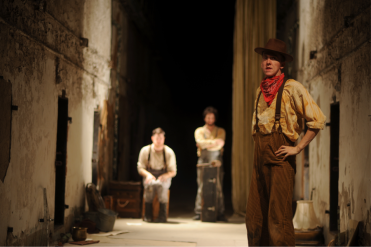 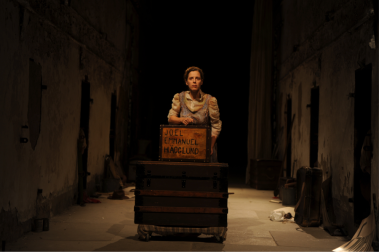 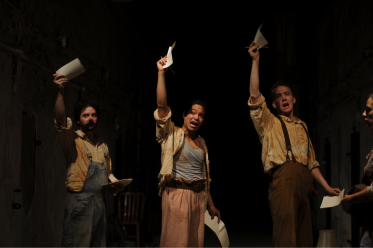 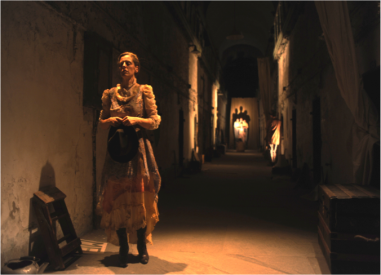 For the NPR nerds out there, WHYY also had us on RadioTimes with Marty Moss-Coane to talk about the piece and its historical context.

Here’s a photo for another play I created in 2010 called SURVIVE! In this one I really wanted to create a theater experience that communicated the massive, incomprehensible size and complexity of the universe. So we had audience and performers moving through 20,000 sq ft of space in a “choose your own adventure” format. A person saw one of 128 different possible unique viewings of the show’s material, and any one person only able to see about a quarter of the play’s content in a single viewing.

Here’s a video trailer for that. And you can check out more pictures here.

And last I’ll share a little bit of my most recent play Welcome To Campus. I created this show in residence at Drexel University (where I teach) and the piece was a traveling “tour” of the campus performed by student actors. The students brought the audience across 2 miles of the campus giving tours of their own lives in the places these events actually occurred – classrooms, dorms, the gym, etc. We also had a second set of performers out in the landscape that magically manifested whatever the person was talking about. In one scene an actor talks about having to cut a friend out of her life who started drinking and spiraling into a negative lifestyle she was comfortable with and as the tour walks by you see a series of students all having the same phone conversation based on the event the guide is talking about. You can catch another profile on NPR, this time on Newsworks, here.

One of the things I really liked about this piece was a collaboration we had with a photographer and graphic artist for objects used in the piece. We weren’t allowed to use official Drexel schwag (our “fake” tour was NOT administration approved) so we created our own folders, maps, tour guide bios, gave audiences a “voucher” for the dining hall (continent on their submission of an application for admission). Kate Raines, a photographer friend, did a brochure style photo shoot of these kids that we used in a power point that started off the show. You can see some of the photos of the students doing their best to look happy and productive.

And at the very end of the show the audience is surprised to walk out onto the main stage of the theater building as they hear “pomp and circumstance.” Their names are called as they received “diplomas” (actually the show’s programs) as they “graduated” our play. Crowning achievement of this show was when an actual Drexel applicant and his parents came to the show and said that this was exactly what they wanted to have in a tour when trying to look at colleges.

Thanks for reading. Looking forward to meeting you!