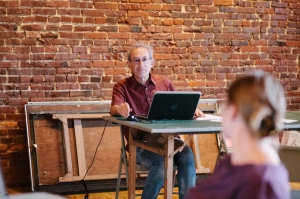 The second collaboration in the Cross-Pollination series was between Ken Kalfus, a novelist, Cindy Stockton Moore, a visual artist, and Adrienne (aka Swim Pony). This group was very project oriented; the majority of tour time was spent telling story we devised together. Consequently, I chose to focus on the process that lead us to that story and the story itself.

Just Up Ahead; germinated from a shared interest in how intimate moments are experienced in public places. Which public acts warrant an audience? How does the urban landscape inform these interactions? What story does this city tell?

Our critical engagement with the urban landscape might best be compared to the practice of the dérive, a term coined by French Situationalist and media theorist Guy Debord in the mid-1950s. This practice differentiates itself from the more casual act of strolling through a city by its keen awareness of a city’s “psychogeographical contours, with constant currents, fixed points, and vortexes that strongly discourage entry into or exit from certain zones”1.

Ken found inspiration in the busiest blocks in Center City, and the group started thinking of ways to tell a story right in the center of Philadelphia to one audience member at a time. We all agreed that the highly curated visual environment and frenetic energy of Walnut Street made it a difficult space in which to tell a story visually and emotionally. There were already so many stories being told on that street that there hardly seemed room for ours, so we opted to do a little exploring to find a neighborhood with a slower pace in which to make our intervention.

Ken, Cindy, Adrienne, and I explored Fishtown with no destination in mind. We found a TV growing in the weeds and a passport lying in the mud behind a chain link fence. After rescuing the abandoned passport and indulging in stories that might explain the travels of its owner, we began to form an idea of how the circuitous streets of Fishtown could lend themselves to a story.

The next day, actor Megan Slater was given a task: lead a walking tour of the neighborhood around Palmer Park. With nothing but the urban landscape for inspiration Megan told a story about Missy, a friend from work who had recently endured a tough breakup. This tour of Missy’s neighborhood took on an astral quality as we envisioned our fictional protagonist staring down from the top of a warehouse on a burning building.

Actors Hannah Gold and Ross Beschler were then given another situation for improvisation. Suddenly, the park was witness to two friends, awkwardly fumbling as they approached a moment that promised to change their friendship forever. The oblique, unplanned, streets of Fishtown were a perfect backdrop for these characters as they struggled to articulate the parameters of their new relationship.

Our dérive was a playful starting point into a longer investigation of Ross and Hannah, their relationship to each other, and their relationship to their neighborhood. It gets tricky to say what things happened in what order—devising is not a linear process—but it became clear that this story was really a guidebook-like tour of Hannah and Ross’s relationship and Fishtown. Ken transformed Hannah and Ross’s improvisations into a short story, Cindy began finding ways to infuse the landscape with art pieces, and Adrienne began writing and recording an audio tour by Megan, one of Ross and Hannah’s coworkers. Ken adapted his story into a script, and fictional Ross and Hannah were brought to life.

Ken, Cindy, and Adrienne spent a lot of time thinking about how best to show their work. Ken’s stories are usually experienced in print, Cindy’s work is usually presented in the gallery, and Adrienne’s actors usually appear in more theatrical circumstances. Despite this, an audio tour seemed like it would allow audience members to see the neighborhood and the story we were trying to tell in it. Audience members could hear Adrienne and Ken’s scripts while searching for Cindy’s paintings and objects that tell a part of Hannah and Ross’s story.

At the start of the tour, audience members are provided with a map of the neighborhood numbered with audio tracks and illustrated with helpful hints.

As audience members listen to Megan’s tour they are lead from location to location on the map. As they travel from  a coffee shop called Steap and Grind, past Hannah and Ross’s houses, out to Cedar Point Bar and Kitchen, and back into Palmer Park, audiences find hidden paintings and take-away art pieces. Cindy’s art installations add depth to Ross and Hannah as characters, as well as shedding light on the way these two people share large parts of their lives. Drinks given out to audience members when they visit Cedar Point reverberate with the intimacy and magic of the trip Ross and Hannah take to see the stars in rural Pennsylvania. Paintings of shadows imitate the haziness of Ross and Hannah’s relationship, while recalling Ross’s allusions to Plato’s cave and rant about the misuse of the phrase “platonic friendship.” At the end of the tour, audience members find themselves back in Palmer Park, witness to a conversation between Ross and Hannah in the flesh.

Though Ross and Hannah walk the perimeter of the park – ostensibly on their way home after work—audience members can hear their conversation as they watch from afar (below). Ross interrupts Hannah, blurting “I don’t think I want to friends anymore.” Their conversation shifts modes from the banal to the cosmic as Ross attempts to explain his feelings to Hannah. Hannah comprehends Ross’s predicament, but, perhaps contending with a more complicated situation, leaves their relationship on uncertain ground.

Words like “friends,” “best friends,” “partners,” “lovers,” and “co-workers” express all-or-nothing, binary paradigms. There are no intermediary words that mean both “lover” and “friend.” The imprecision of our language makes us unable to describe interpersonal relationships with a single noun. Ross and Hannah are caught in this struggle, recognizing that their relationship lies somewhere between a “1” and a “0.”

As Debord points out, “‘an urban neighborhood is determined not only by geographical and economic factors, but also by the image that its inhabitants and those of other neighborhoods have of it.1’” Ross echoes this in his conversation with Hannah:

Hannah, the first couple of times we came to this neighborhood, what was it? Just some crappy Philadelphia streets, broken sidewalks, overgrown lots, trash on the curb, guys in their undershirts, yupsters moving in. But it became the place we share. We’ve imposed the meaning of our lives onto this place. That doesn’t make it the best-looking place in the world, or the only place we could possibly live. But it’s the place we’ve made.

This tour of a fictional relationship offers as intimate a look at Ross and Hannah’s relationship as it does of their neighborhood. As audience members traverse the angled streets of Fishtown, they find themselves immersed in the architecture and emotion of someone else’s Philadelphia, waiting to see what happens next for Ross and Hannah.

Arianna Gass is a recent graduate of Vassar College. In addition to documenting Cross Pollination, she is the Program Manager for Drexel University’s Entrepreneurial Game Studio. Her own art practice is located at the intersection of digital and embodied play, and her scholarship focuses on feminism, performance studies, and game studies. You can find more of her writing and work at www.ariannagass.com.