The residency week with Michael Kiley, Lyric Prince, and Adrienne Mackey started with small, childlike drawings on construction paper. Sitting around a small table in a café, Lyric guided Adrienne and Mike through drawings, replacing their drawing tools at random intervals. Lyric tasked them with creating symmetrical designs by drawing a pattern on one side of a folded piece of paper, then replicating the pattern on the other side. These small improvisations lead by Lyric “set the stage” for the larger, collaborative drawing improvisations that happened later in the week.

The next day, we started exploring the question endemic to Cross Pollination residencies – how do different kinds of artists tackle the creative question? Adrienne, Lyric, and Mike moved around the space, warming up their bodies. Lyric, hanging from the large metal beams of the ceiling, explained that her work happens when “emotion and image snap together.” Adrienne, lying on the floor, contemplated why her endeavors are often undertaken with an event in mind, a set due date. Michael, discussed his process in somewhat mysterious terms; explaining that he usually finds a sound that piques his interest and follows it to a conclusion. He admits to being relatively unconscious of the space between slogging through something and having a finished piece. Even though the three had really different means of accomplishing their creative goals, they all shared a mutual goal of bringing people together through their work. Adrienne values experiences that make people feel “bigger, connected, valuable,” Lyric hopes to unite people through her drawings and paintings with the universality of their emotion. Michael mentioned that he likes to bring people together, but often focuses on the vulnerability of sound, especially singing. He described the mouth as a particularly vulnerable part of the body. Opening our mouths and making sounds, particularly sounds that might not be classified as “singing” can be both uncomfortable and taboo.

I think it was this point at which Michael and Adrienne, who have done vocal improvisation together in the past, introduced Lyric to that practice. Starting with just a sustained note they each matched, they slowly started to challenge each other, using their voices and their breath to make unusual sounds. While this may have been a challenging exercise for Lyric, she rose to the occasion, just as Adrienne and Michael did to the task of drawing.

Regrouping, Michael posed a question to the group: could we construct a practice, both performative and transformative, that can be felt by a watcher and given more meaning by the watcher’s presence? This lead them into a conversation of differences between a time-bound medium like performance and a time-less medium like visual art. Various ideas for performances were mentioned, but the emphasis always came back to a practice – something that could be observed, but something that ultimately had intrinsic value to the performers themselves.

They agreed to move towards collective improvisations that would integrate aspects of vocal improvisation, sound, and drawing. They graduated from small pieces of construction paper to a floor covered with three-foot by two-foot post-its, eventually working on large sheets of fine drawing paper, four feet wide and six or seven feet long.

The first large-scale improvisation was created with graphite on a large piece of paper. It was abstract, but the three focused on creating balance and symmetry by echoing the shapes and sounds they saw and heard from others. 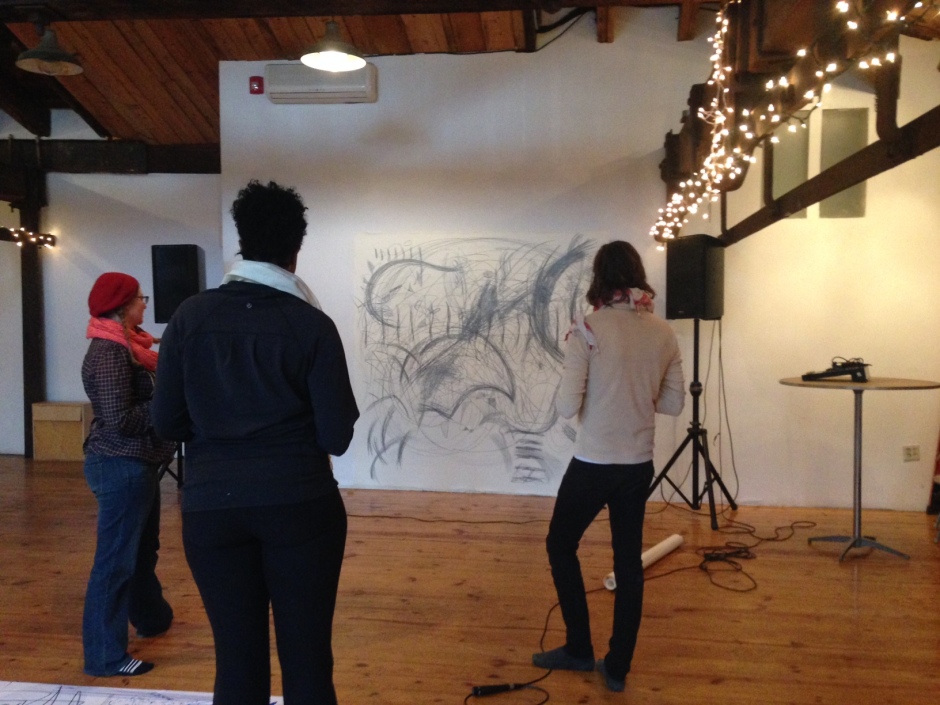 For the next improvisation they decided to integrate one color (orange) and a central image (a portrait of yours truly) into the composition. I got lost listening to this piece. I had never stopped to consider the rhythmic or tonal qualities of drawing, and from where I sat, the sounds of pencils drawing on the rough paper were unexpectedly melodic. Lyric, Michael, and Adrienne had started to use each pencil as a distinct “voice part.” Bold, soft graphite crayons made sweeping baritone sounds, while harder, thinner pencils yielded a piercing coloratura as they were dragged across the paper. 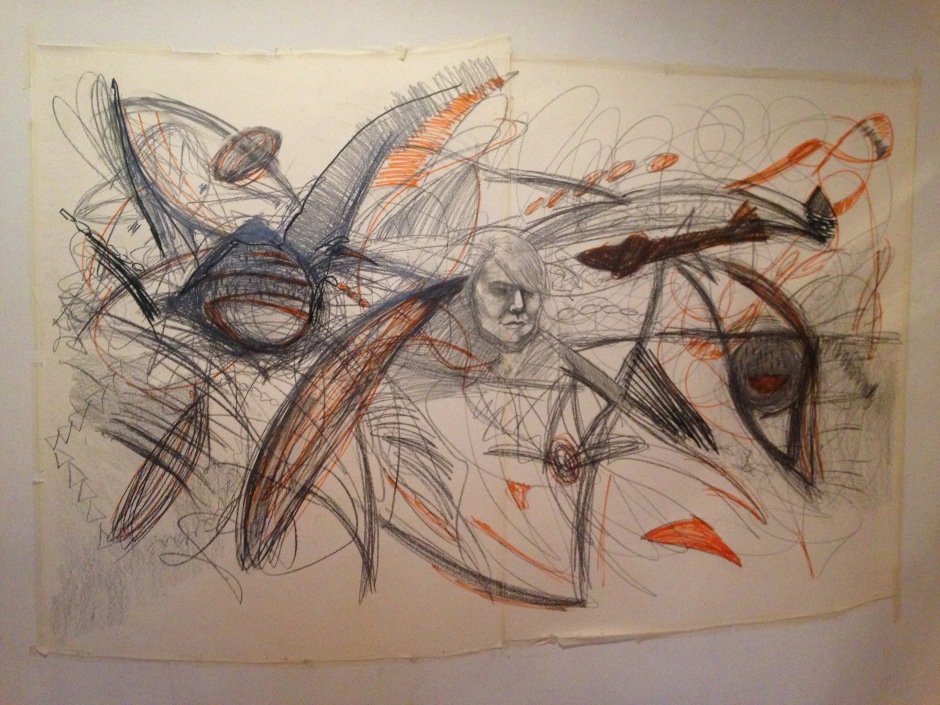 This improvisation was one of our longest; close to an hour, and the only one that featured a non-abstract image. Regrouping afterwards, Adrienne talked about struggling with “naming” shapes. She realized one of the shapes she had been working with looked like a shrimp (see middle of the right side), and struggled with simultaneously wanting to and not wanting to make the shape more “shrimp-like.” The three agreed that abstract shapes made it easier to listen to the sound of the improvisation, while making representational images placed a premium on the visual aspects of the composition.

The next day, Lyric, Adrienne, and Mike started to get even more specific with their improvisations. Pencils did not just represent separate voice parts, they could also perform pre-determined shapes that yielded particular sound qualities. There were legato arcs and staccato dots, sharp triangles like a sforzando and shading that took on the quality of a vibrato. The picture below has an outline of the different shapes and the structure they worked with for their improvisations this day. 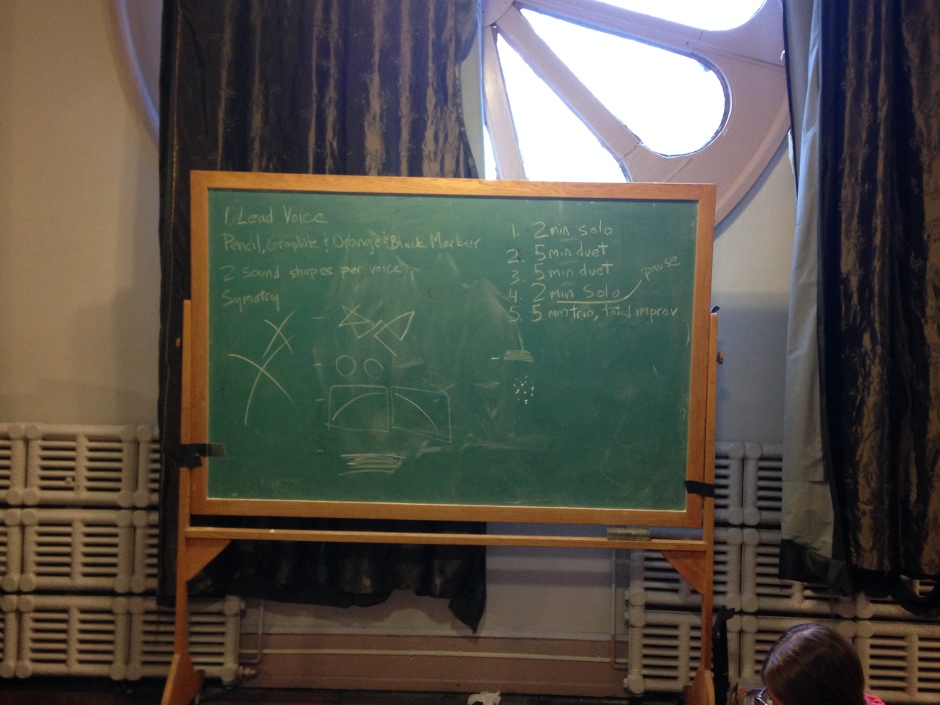 It’s a little hard to read, but the chalkboard says:

Below that are some of the shape/sounds they’d be using: arcs, x’s, circles, shading, and dots. To the right of that there is a general structure for the improv:

This structure yielded this drawing.

Michael, Lyric, and Adrienne seemed less satisfied with the experience of this improvisation. It seemed as though the visual vocabulary the instituted was a little restrictive. The composition had a degree of symmetry and, therefore, balance, it lacked that extra something that made the previous day’s composition so special. [Also, an aside, I find the resemblance between this drawing and Marcel Duchamp’s “The Bride Stripped Bare by Her Bachelors, Even”  to be a little uncanny!]

For the rest of the day they continued to experiment, eventually adding techniques like smudging graphite with paper towels, using water to peel layers of paper off and create texture, and using erasers to leave faint outlines. Each of these techniques introduced a unique sound quality to these improvisations, which continued to take on unexpected musical qualities. 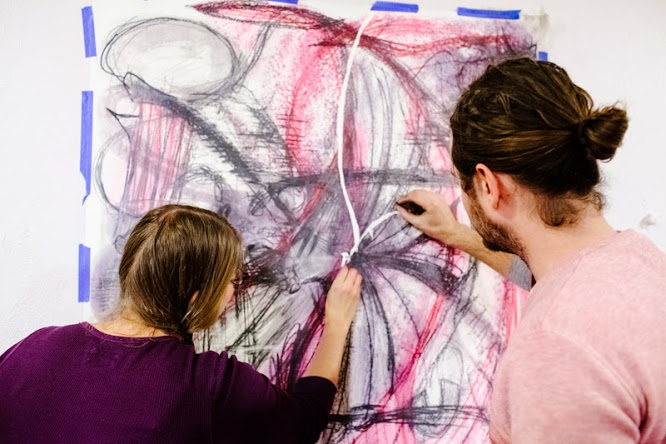 On our final day, we added a bunch of new “instruments” to the improvisation, including different kinds of erasers, markers in vivid jewel tones, several pieces of leather for smudging, and new pencils in varying widths and shapes. 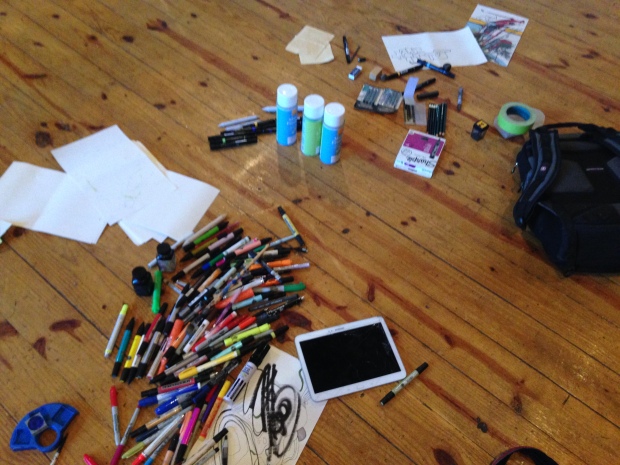 Together, they worked on integrating the research they’d done in the previous few days with vocal improvisation techniques. Using binaural recording technology, they created an image that was also a soundtrack. You can hear the recording of these shapes , but below you’ll find a short video of what the improvisation looked like from where I sat. In order to best observe this clip, I recommend watching it twice – once with your eyes closed, and again with your eyes open.

In a week Lyric, Mike, and Adrienne created a practice that likened drawing to musical composition. They found that visual and aural symmetry were useful tools in creating balanced and interesting compositions. As they got further and further from drawing shapes that corresponded to observable physical objects in real life, they found more unusual vocal qualities capable of echoing those shapes. The three learned to draw shapes for their sounds, improvising in a new, interdisciplinary jazz.

Arianna Gass is a recent graduate of Vassar College. In addition to documenting Cross Pollination, she is the Program Manager for Drexel University’s Entrepreneurial Game Studio. Her own art practice is located at the intersection of digital and embodied play, and her scholarship focuses on feminism, performance studies, and game studies. You can find more of her writing and work at www.ariannagass.com.