Today you’ll meet the first two of the 30 Cross Pollination finalists. I’ll share a bit about both their initial applications and the conversation I had with them this past Monday.

It was obvious to all of us on the reader panel that this is what both of your artworks have in common: a deep interest and exploration in kinetic exploration and how that functions through time. How interesting might it be then to give two artists who’ve studied these elements via different means a chance to share their research.

Brad: As a multi-discipline artist, I frequently generate inspiration through combining disparate media types, and the juxtaposition of incongruous ideas. 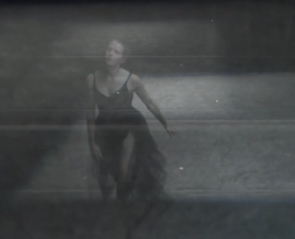 There was a way in which the bodies in the dance samples that Nora presented were abstracted, almost mechanical, as if the human beings had become manifestations of forces. Everything about the presentation of the two dancers in “Divergent Iteration” (a name by the way that could be the title of one of Bradley’s pieces) from the shifting lights to the static and ping of the soundtrack emphasize the way these bodies function like two interconnected vectors pushing and pulling each other in response to constantly shifting stimuli. And in Solo Phase, there was a similar kind of algorithmic exploration of a single dancer layered over top her self in time.

Pick three adjectives that describe the stuff you make

That simplicity, grace and wistfulness of the single dancer split into two, rotating around herself in Nora’s pieces felt like the same kind of engrossing pull we felt look at Bradley’s “Tetra-Cycling” sculpture. And when I first saw Bradley’s sculpture “The Sway of Public Opinion” I couldn’t get over the way this combination of metal pieces added up to something so human, something so familiar. The combination of rotation and undulation of this work felt like dance.

Also, every single one of the readers is crazy about Mechanicards. This one in particular blows my mind.

There was also something exciting about the fact that both of you also have interests and talents in other mediums: Nora’s in video and still image clearly weaving its way into her performance practice and Bradley’s astonishing whole second career in music. Nora’s still images of her dancers with links to these works on video pasted onto walls and newspaper boxes gave a sense that the dance could have an infinite audience. Brad’s exploration into moving theatrical sets similarly changes the kind of audiences that are able to view his works.

Nora: In collaboration, I’ve witnessed my work simultaneously becoming more “itself,” AND becoming radically something else

A picture from Nora’s application

What’s exciting about this combo is that we have Nora turning humans into stunning mathematical equation machines and Bradley who manages to take inanimate gears and forces and create living balletic motion.

When we met up in person my first impressions were that these were two artists who were open and receptive to a sense of experimentation and play. They WANT what Cross Pollination is about and they are so excited to try something new.

We talked a lot about embracing failure and how risk is a huge aspect of what creates real artistic growth. We talked about where the initial conceptions and research of our artistic products happen – for Nora and I in our rehearsal spaces and for Brad mostly in his head – and how that interplays with execution and precision of outcome. They also both really resonated with the idea that I talked about of looking at the frame around your process – seeing if you can uncover the tacit assumptions in how you make things to really see if you can question everything about how you make. 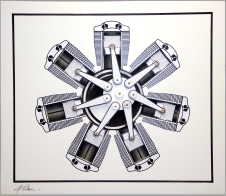 I know I really want to see Brad’s making of a sculpture in real time. That he was an engineer and has to have such a precise sense of creation methodology is really interesting. And when Nora talked how she approaches creating choreography as a long series of tiny research projects I felt a real kinship in the sense of building up little pieces one at a time and then assembling them into a cohesive narrative whole.

Cheers Nora and Brad! Thanks for an awesome meeting. – A