I’ve been musing this morning on divining rods.

I’ve never actually used one, but the idea of this object – a stick that subtly helps point one to something desired – is one I love. I invoke the divining rod all the time in my teaching as a metaphor for thinking about creative impulse like water that hides under the surface, a flowing material that needs a bit of focused attention in order to be found. I like that using a divining rod is a tactile endeavor, an action-based object held in the hands rather than examined in the mind. I like its connotation to something spiritual, a channel to something just a little bit mystical and beyond the natural realm. And too, I like that the tool is one that requires the body to listen to a pulsing current already existing in the world. A divining rod insinuates that creative spirit requires one to get outside and muck around a bit in order to be found.

The past months have felt a lot like interminable winter. There is, of course, that literal season which I’m sure we can all agree outstayed its welcome far beyond what was appropriate and polite. But too, it’s felt a bit like the space between last year and this one has been a creative freezing that is frustratingly resistant to a thaw. In the din of the daily artistic grind there are so many forces that pull towards themselves – funders with ever so slightly magnetic needs to fulfill their board’s directives, students with aims that require an ever so mild adjustment to the inner compass, collaborators that exert subtle forces on the instincts of the work. In the midst of this one can lose that inner flow of water, that first thirst that drew the body to drink. None of this is to say that I feel I’ve been creatively unproductive. In some ways one could look at the last year in Swim Pony’s work as a time of far greater produce than any in the past decade. But, to take this metaphor to its fullest, it’s also felt in some way like ground that has been over-planted. The nutrients that allowed the soil to yield such fruits feel depleted, as if there is simply not much left from which to grow.

What is that thing that I sense myself seeking?

Maybe it’s easiest to just call it water. At this moment the current feels slack and the tide feels low and while I know I’m a savvy sailor who can ride the ups and downs, I fear without finding a source of liquid force, the boat is going to get stuck. As the weather warms, and the ice begins to melt, it seems imperative to get outside with that stick and figure out where all the water has gone.

A few weeks ago the husband and I undertook an adventure to the Wheaton Arts Center in Millville, NJ. I found an exhibit listed on a “Things To Do” website: something to do with biology and the intersection of science and art in the form of glass. It seemed promising enough that we set out on a 45 minutes drive to a small museum devoted to the roots of American glass manufacture in the local area.

Much of the museum was chintzy in a charming kind of way. Not terribly interesting, I’ll be honest, but relaxed enough that our general lack of said interest didn’t interrupt an enjoyable walk through a faux-Victorian-styled home filled with fragility. We wandered through the exhibits on the origins of American Revolution-era glass blowing, the  catalogue of a building up and then eroding away of an industry throughout the area. We saw shelves of Tiffany and mass-produced Depression glass. We learned that creation of a “Millville Rose” paperweight was a sign of a high level skill for those craftspeople that managed to master it.

And then, at the very end of the circle through the museum, we came upon an exhibit cataloguing the work of an artist named Paul Stankard. His form: nature-inspired themes encased to form paperweights. Collected in this area were hundreds of small round objects taking nearly identical form in perfect rows. His early stuff felt about the same to me as much of what we’d already encountered – pretty but a bit too delicate and girly for my tastes. These first works were thing I would never buy for my home because a) where would I put them, b) fancy glass makes me nervous, and c) the only thing they do is gather dust on some shelf where they never get looked at.

What I’m saying is that Stankard’s early works provoked little of the spirit of water in me. They were decently photorealistic depictions of flowers that seemed nice enough to spend, say, a few seconds on noting that it probably was really hard to make a cactus flower out of glass. They were objects that offered an “Oh… Huh.” level of artistic response. Then we turned a corner into another room, one filled with Stankard’s later phases of work. From the very first approach, they literally took the breath right out of my body. 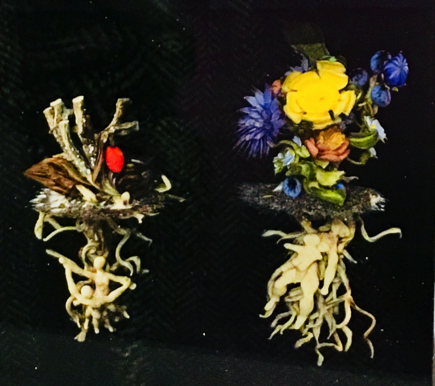 The images I took will not do them justice, these intricate tiny creations of flowers and roots and bees. They were small dioramas of surrealism, of ritual, of things sprung from supernatural purpose. They were absolutely transcendent tiny worlds encased in crystal, suspended in motion so perfect it’s hard to believe they are not alive.

Some minutes after first encountering at these objects, I stood in front of a video playing an interview with the artist in which he articulated a turning point in his creative practice from mimicry and re-creation into something more metaphoric and representational. I walked back inside to look again at the tiny bodies hidden in the roots of flowers made of glass and heard Stankard’s echoing voice explaining something about metaphors of life and death and giving oneself leeway to let go of what a flower literally is and instead dive into what it might have the capacity to reveal.

These art works are deeply comforting to me, not only in their intense and vivid beauty but in the way they underscore the long arc of creative trajectory for the maker. They hold in their perfect suspension the promise of something unseen to break through. In the midst of what has felt like the unending cold and gray sterility of long winter, it was a reminder of future warmth and growth much needed, that perhaps every mundane step can be a tiny pull towards an inner stream of something downright divine.

Right now, the best I can think to do is to take time each day to try and feel the pull of water, even when all that seems to be present is its absence.

To take small steps, in whatever direction a bit of wood demands.

To read, if only as a practice of feeding the soil.

To write, regardless of whether or not the work finds its feet.

To whittle away at the dam, without worrying too much about what’s released.

So here’s a letter of well wishes to you all, written in the hopes you are finding the emerging spring.