I had promised myself that this time I wouldn’t.

But I did it anyway.

And I certainly wouldn’t be writing about it here on the blog if my rabbit hole of darkness and anger and violence and misogyny hadn’t lead me to a spinoff rabbit warren of articles by and about film critic Ann Hornaday’s recent response to the tragedy.

Ok look. I’m not going to spend much time here rehashing exactly what went down in this exchange. If you haven’t seen it online and formed an opinion, here’s the original essay (with a follow up video in which Hornaday contextualizes some of her initial statements).  And here are two other thoughtful articles, one by a woman and one by a man, that follow the original one’s social media aftermath and point out some very salient and relevant points about said online responses to it.

And here’s the thing that’s messy and hard for me to explain.

In my view, as a women who shares stories with audiences for a living, Hornaday raises interesting and worthy points of discussion. I don’t know much about the recent work of Judd Apatow and Seth Rogan because my first experiences with both these artists fell very much in line with Ms Hornaday’s assessments of their collaborations as “outsized frat-boy fantasies.” But given the little I have seen, I see validity in her central argument: that casual misogyny present in works like these (and much of our mainstream media) can and probably do play a role in the way young men (including the one from the UCSB shooting) adjust their expectations of how the world (and in particular the women in it) should behave in relation to them.

Any honest and intelligent reader of her article should not claim that she makes a causal link between the movie type she mentions and the UCSB killing spree. She does not. But this does not stop lots of people from saying she did.

In a way, she actually implies a much deeper, and possibly scarier thing: that this one act of aggression by a single deranged individual might reflects strains of deep seated misogyny in our larger cultural consciousness. She implies that these movies could be affecting us all and not simply those that seem obviously ill. That in some small measure they are training every one of us to buy into values and desires that are hurtful to women and that it is not unreasonable to expect them to be manifested, to some degree, in reality.

Artists know this. They know that the stories we tell our audiences, the art and culture we offer them to consume, these are a kind of mirror of the sensibilities. Our works are the ideas and values that exist within all of us made visible and tangible to the viewer. To those that rant about simply understanding the difference between fantasy and reality I say this: just because I know that they are different, doesn’t mean one does not affect the other. Just because I know it’s probably not realistic when I see a pudgy character with few resources or skills in life able to “bag” an intelligent and successful and beautiful Katherine Heigl in a movie doesn’t mean it isn’t conditioning me to normalize it once I have seen it.

This is the stuff that dreams are made of…

In some measure art is indicative of the collective needs and desires of that culture we as a people are connecting to. But art is a feedback loop that flows in both directions. These stories come from us but they also reinforce our current mores within their narrative structures. They are a way in which the creators that produce them are able to mold and shape the creative landscape of influence in the future. Simply by watching a story we must take it into ourselves. Consciously or not we reflect on ourselves in relation to it. And the more something appears to us in narrative form, the more we feel its weight in our collective cultural consciousness. The more it seems like what’s normal and around us all the time.

If a prevalent type of story irritates us what are we to do? We might disengage with this aspect of our dominant culture (an act that is sometimes only possible with great effort and little external reward) or perhaps we might find ourselves slowly grinding down our rough edged opinions until they can coexist within the dominant ones.

Perhaps this how casually racist, sexist, genderist, classist, all the ist-ists out there are able to continue so much longer than they ought. Because the ordinariness, the omnipresent banality of such isms, wears down our outrage. Until such things become repeated to the point of cliche. Until they seem like the stories we’ve always been telling. Until it doesn’t occur to us that another story could even exist. Until they are as common and invisible as the air all around us.

And I imagine it’s tough if you fashion yourself a kind and funny and sensitive human, tougher still if you really ARE a kind and funny and sensitive human, to find that without intending to you’ve been standing in such air. That you didn’t want to breathe it in but you were without knowing it. That you just were going along about your business not trying to hurt anyone and now you feel trapped and can’t breathe and you’re labeled bad for just being yourself. And that this labeling someone is maybe not just indicting you with a single and simple solvable accusation, but something much bigger, something that you are deeply entangled with, something that would take a lot of life changing to really get into conversation real with.

To engage with that question is the hard hard hard thing. To dismiss a small aspect of it… To pick apart the argument and allay one’s unease with a sense that the accuser is the problem… To name call and take the fight to a simpler, lower level… much easier.

Much easier than admitting you are NOT a bad person but that sometimes we all do things that have many valences of impact on the world and about which all kinds of judgements can be made.

So I think it’s understandable that someone would react on the defensive, with anger and with outrage. Because for that person it is much more complicated that simply regretting one thing they said or did. It’s reckoning with all of it. No one wants to be called an “ist.” I think maybe no one is just an “ist.” Or that we’re all “ists” to some degree. But that label, that over-simplification of one’s identity, is what I think they fear. So they fight (Oh how they fight!!) not to end up in this box or stuck with that label or categorized in ways they didn’t agree to.

A little bit ironic, no?

It is so hard to read that article and think that anyone imagines that it is anything but a woman who wanted to create a seasoned and reasoned and thoughtful raising of the question that perhaps, perhaps, perhaps there might be a way in which the stories we are currently telling have an effect on us, and perhaps especially on our weakest members.

It is so hard when at every turn in the article she raises questions rather than declaring angry blanket statements.

It is so hard when she reminds the reader that this influence is by no means the sole or even dominant force underpinning the choices that this sad and ill child made.

It is so hard to imagine that someone in that field in a position of power could completely and totally write off a statement like, “it’s worth examining who gets to be represented on screen, and how.”

When this article is perceived as a vicious, angry and male-hating attack. When an intellectual and well articulated argument on a huge number of societal and cultural forces is reduced to “How dare you imply that me getting girls in movies caused a lunatic to go on a rampage.”

And it is the hardest, the kind of hard that almost makes me weep, when that kind and funny and sensitive person, one clearly inspired by hurt feelings and a desire not to be labeled as part of the problem, responds in a way that incites a devolution into the EXACT kind of casual misogyny the article intended to address in the first place: 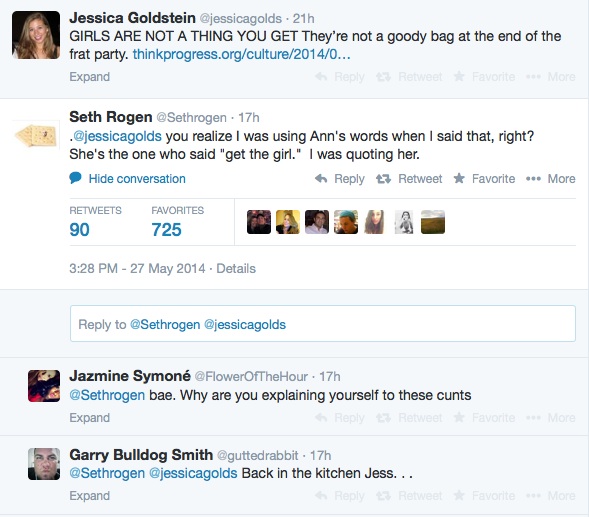 If how Ms Hornaday brought up the subject is the (WRONG! HORRIBLE! INSENSITIVE TO THIS ENTERTAINER’S FEELINGS YOU HORRIBLE BITCH SLUT WHORE!!!!!!) incorrect way to address this…

How on earth are we supposed to talk about it?

“As Rodger himself made so grievously clear, we’re only as strong as the stories we tell ourselves.”