One of the things I really liked about Elizabeth’s application was her questioning of how visual media can (perhaps may need to) enrich the experience of her music. I loved this statement in particular:

“My experience as merely a musical performer and producer isn’t going to cut it anymore.”

What better attitude towards tackling collaboration between genres than this? And it’s clear in her samples that this is already an avenue of exploration. She a musician thinking about the future of her music genre and she’s created a body of work that explores how visual performance can help a modern audience interface with a classic art form. From what she shared, it looks like most of that exploration has thus far been with other live performance genres (there are some great dance clips in particular in her sample) and it made me wonder what would happen if the visual media that her music confronted wasn’t also in motion (or at least not in an obvious way)?

Similarly, I liked the way Nick is testing the way his audience’s interface with his work. He creates his images fast – drawing multiple illustrated versions of real life photos in rapid succession and then combining them into the final product. His pieces in some cases are also not simply static two-dimensional objects, but works that change with the passage of time (as in the installation at Eastern State Penitentiary) or with perspective (as in his “Into the Woods” series). And in this way he strikes me as a visual artist perfectly primed to explore a collaborator whose output is performance-based.

He included this in his application:

“I am also interested in how one medium translates into another – what is lost and what is gained, what language about process, creation and critique are shared and what is untranslatable between mediums.” 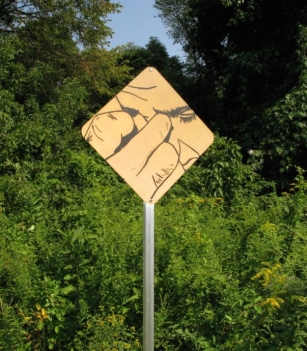 And this is almost to the letter the initial spark that caused me to create the Cross Pollination program in the first place. I had just finished a conversation with a peer artist, a modern dancer, and thought:

“Wow. Their starting point, their sense of narrative, the frames with which they view their work are SO different, even though theater and dance are so similar in most ways. What would it mean if I had to make performance for an audience in the way a visual artist does? What about if that person had to think of their ‘static’ object as moving through time and space?”

In our meeting it was quickly clear that all three of us are solid in our current artistic methodologies but really interested in the possibility for what can happen when we aren’t just stuck in our rehearsal room, studio, or practice hall. Both had previous experiences that they shared working with a person outside of our discipline – for example Nick with a performer in creating that Into the Woods series, Liz in an avid search to combine visual components like dance into her performances – and discovered a totally new kind of thing based on the collaboration.

Pick three adjectives that describe the stuff you make:

This trio also seemed interested in figuring out how to make our work interesting and useful to current audiences by hooking people in with something novel – glow in the dark paint in Nick’s illustrations, a shadow play with Liz’s music, involving the audience more directly as a character in mine. That we all are intrigued by the way that we need to make sure our work isn’t just for our peers but for a lot of different people feels really ripe. We also talked about trying to really stretch ourselves past the limitations of our current ideas of collaboration. I came away really interested in getting performance (theater, music) to unseat the idea of theater as a time-based performance and think more like a visual artist – with a sense a presentation that can be interacted with in lots of ways.

At one point we were talking about the satisfaction with trying a totally new form – me taking up the piano, Liz talking about the feeling of playing recorder for the first time and Nick saying he’s always wanted to try his hand at the banjo. Nick joked that our residency time could be employed making a “band” out of these and I said, “You joke, but what if?”

And though we all laughed at the thought, I bet if I proposed it, I bet they’d be willing to try it out.