There’s a story I tell about myself as a child that goes like this: around 5th or 6th grade I learned about infinity and it gave me an existential crisis. Trying to wrap my middle school mind around a never-ending mathematical concept opened up a door to the idea that there were things vastly bigger than my own consciousness. Once that door was opened, once those interlocking curves of a sideways figure eight began unspooling, I couldn’t go back to a conceptual space where the world could be wholly known. Infinity showed me the universe was unending, while I on the other humble and human hand, was not.

In the fall of 2008 while in France I took a trip to the Catacombs of Paris. I don’t know what exactly I thought I would be doing there. I don’t know why it never occurred to me that a massive shrine containing the skeletons of over 6 million bodies might not be the emotional equivalent of visiting the Monet museum, but I honestly went in thinking little more than that I was in for a light afternoon of cultural purveyance.

The worst part was the bones just sitting in massive piles. Somehow arranged in intricate designs the skeletons were abstracted in a way that was tolerable, but the piles, the vast and completely unremarkable piles of bones, and the sense that those inanimate objects used to be people and that it is likely no one alive remembers or cares about them… It left me with the intense and pressing desire to do something, to make my life mean something, to create a legacy that helped me feel alive in the face of those sad and lonely mounds of former humanity. That night I wrote for hours, trying to unpack the intensity of the feeling the experience had provoked.

While I couldn’t directly bring myself to think again about that trip to the Catacombs and the panic it produced for some number of months, I will say that within a year of going I made three original plays, quit my day job, and got engaged. 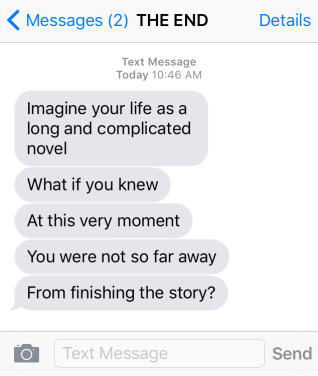 On page 14 of psychotherapist Irving D. Yalom’s book Staring at the Sun: Overcoming the Terror of Death, he and a patient undertake a thought experiment grounded in Greek thinker Epicurus’ writings, imagining the oblivion after death as the same as oblivion before birth. In the book, he talks about this as a tool to find solace. We do not fear the time before we were born, he says, and so too, might we come to lose our fear of the time after we die.

The first time I read the book, I made the following note in the margins:

This thought is in NO WAY comforting to me

The thesis of Staring at the Sun is that death anxiety manifests from a fear of a life unlived. Yalom’s point, as I understand it, is that by acknowledging our current actions in the context of their inevitable end, we can gain perspective about what is important to us. Such “existential shock therapy” gives us a sense of whether the things we currently are preoccupied with will really matter to us in the long run and leaves us grappling with our need “to construct an authentic life of engagement, connectivity, meaning, and self-fulfillment.”

Multiple times as I read this book I started to get the infinity feeling. But I also realized that the more I read, the more the reading got easier. The past year I’ve begun to talk about death and dying a lot, and the more I do so, the less weird and horrible the topic feels. These days, while I can’t say I never get that spinning unending queasiness, it definitely doesn’t have the same hold over me that it once did. And I’ve made a lot of changes that have moved me away from what I feel like I’m “supposed” to be doing and towards what feels authentically who I am.

It’s a strange thing to ask a person to think about dying. Not dying in the abstract or dying in the context of a gritty television drama or immersive video game but dying in the way that each one of us personally, inevitably, and unquestioningly will have to experience.

But then again… isn’t it equally strange to walk around as if such a thing doesn’t exist?

The End isn’t a game, exactly. It isn’t theater, exactly, either.

It’s a month-long contemplation. It’s a structure designed to create a little existential shock. It’s room to step back and reflect on what it is you want your life to be.

And I’m inviting you to it, into what I hope will be an experience of bravery and questioning and meditation and fear and, yes, I hope, even fun.

[Edit: Applications are now closed. Thanks to everyone who applied – stay tuned!]

Or write to SwimPonyPA@gmail.com to ask for more info.

Be well, dear ones.