Create a Scene:
We each designed a potential scene or interaction idea. Adrienne made a scavenger hunt sequence that involved interactions with laypeople who were “in on it” and surprises layered into the landscape in unexpected places. Maria wrote and designed a note from an avatar/character prototype of The End where she experimented with aesthetic, language choice, and perspective of the being communicating with the audience. Sam created a prompt for an audience activity to inspire reflection on the meaning of personal objects and cultivate ways for an early interaction to play into later events.

Reflection and Response:
To experiment with how people can externalize reflections and how willing they are to communicate digitally, we took turns having one of our trio go into another room and meditate on what regrets she would have if she died in a month. Then, she was invited into a Google doc, where she was able to have a conversation with an “anonymous” person about her experience. Even acknowledging the influence of the meditator knowing who was on the other side of the computer screen (the other team members), the meditators were surprised to find how willing and able they were to open up to intimate conversations on screen.

ID Cards/Passports:
Based on an idea to begin The End with an application or survey that gathers information about players to be filtered back into later parts of the game, we each created an application for another team member to fill out. Using those, we took the responses to the application we’d written and designed an ID card or passport for the responder based on her answers. Having multiple versions of IDs/passports designed gave us an idea of what questions were useful or effective and what aesthetic felt truest to our goals for the show. 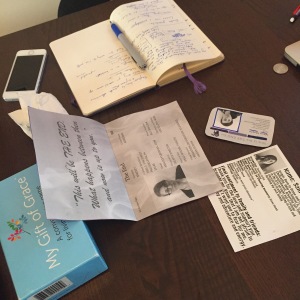 Anonymous Texting:
We did a variety of experiments with texting from anonymous phone numbers using the app TextFree, including improvising conversations among ourselves, texting people we actually knew anonymously, and trying out a planned game conversation with the assumption that the player had been primed to receive text messages as part of The End. The variations on these experiments gave us valuable information about what makes people comfortable engaging digitally. The following is a sample conversation between Adrienne and Sam, where Adrienne is using an anonymous number and playing the role of one of the guides for The End, and Sam is an audience member who’s agreed to be available at a certain time. It was hard to simulate the player’s reaction and how much intimate knowledge would start feeling creepy, so we followed up these experiments with a beta test where we tried a series of these experiments on people outside our creative team. 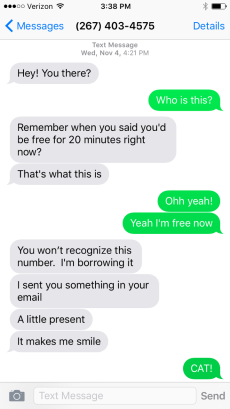 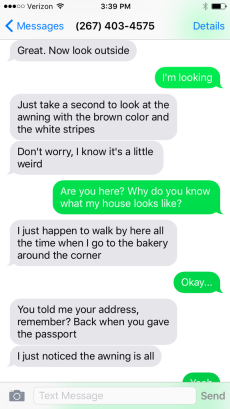 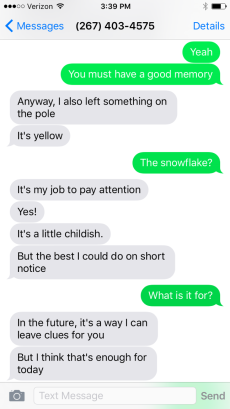